its-a-me-catboi wrote:So, after a loooong time of experiments, I successfully installed some mods (Dark Injection and Force Save). but for some reason it just does not want to work.
I have the Spore ModAPI Launcher pinned on my taskbar, and everytime I run it, this error message appears:

(If the Image didn't appear, the message is "Could not find default preferences. The data directory is missing or corrupt.".)
I tried going to the launcher's location in my files and run it from there, but it didn't work aswell. The game also doesn't even open if I run it from Origin!
Anyways, my laptop has 8GB RAM, 1TB of space in total(584GB free), and I had the Steam version of Spore, before getting the Origin Key and transfering it to Origin.
Please, help me, I was really excited to play Modded Spore, and I don't want to give up on trying to play it.
Edit: I forgot to mention, I have C&C, GA, and the newest version of Spore.

I have the same problem. help

Is there any way to fully Uninstall Spore ModAPI?
Top

I have a problem with the spore modapi launcher kit. When I open the installer, I choose the "first time" option, choose the path, and click install. As it should be. I get the screen with "installing" for a moment, the bar stays empty, and then the window closes. Do you know what could be the cause of that?
Top

That is a problem in my PC or in Mod ip launcher? because i cant load creatures that made with mods like DI and other
This message appears when i run mod ip launcher
I use spore from GOG
i try to load creature by dragging it's png into folder with my creations but when i open spore with spore mod ip launcher it crashes

EDIT: fixed the problem by reinstalling the modapi

realized i wanted to reset my galaxy, closed the game & deleted game0 folder

I had this error too.
It was caused by antivirus.
I needed to reinstall antivirus.
I had avast and it got bugged.
Reinstalled and had after restart check from usb.
Clean and modapi started to work again.
Or just turn it off when playing.
Top

Basically, every time I load a save it asks me to name my captain again, if I look at the timeline and hover over my captain it says "Unknown Captain" with a string of code or something, and when i go to the first mission world and try to zoom in the game crashes when loading up the page that lets you beam down. It's very consistent. The only thing I use the ModAPI for is SnekyGraphics, but i also run the shiny tweak and at 60fps. If I run spore without SnekyGraphics but still through the API, the game crashes. But when I run it without the API at all, I name my captain and the name appears in the timeline, and then I can enter the Adventure world.

I've uninstalled and deleted everything multiple times, went into appdata and programdata to remove all traces of the modapi, but when i install it all again it keeps happening. Currently using ModAPI version 1.2.0.11, spore is on the assymmetry patch, I obviously have GA and C&C.

Please help, it kills me to think I fixed this, get through all the stages and crash on the first mission, i just want my game to be pretty

I know it's been a couple of months, but I've been having the same problem. Every time I load my save, it asks me to name my captain, and it won't let me beam down. I have a decent amount of mods installed, but I uninstalled all the adventure-related ones.
Top

Hello. There was a problem with the Dark Injection v9 beta mod.

The problem is that the mod does not work even when I opened the game through the launcher (also tried through the administrator) and I don't know what to do. I installed several pirated versions of Spore and still, it didn't work for all of these versions. Tried reinstalling Spore ModAPI. Help me please

(I hope I turn to the correct topic)

Hello, how do you completely uninstall the ModAPI? For some reason Spore doesn't work in fullscreen on my laptop so I either have to force it to run in 640x480 fullscreen, or 1920x1080 windowed. The base game and GA work this way but the ModAPI launcher can't be forced to run in that resolution, and now it crashes the game everytime it's launched, even when trying to launch the GA executable. Only the base game launcher works now. Is there a way to modify the resolution the ModAPI Launcher launches the game? Or how to completely uninstall it? Thanks in advance
Top

Yes - setting Spore itself to use the dedicated GPU.
Switching to a dedicated GPU won't fix the 30 FPS limit or the flat graphics, those need to be fixed separately. There are threads on Davoonline about fixing both of those.
Creator of Solar Spore, Adventure Water and Sporigins.

How do i fix it?
Top

EyoZenExtras wrote: ↑Tue Feb 16, 2021 5:00 pm When I open Spore dark injection I get an error that the Spore ModAPI launcher is not detected

1. Where did you buy and install Spore from?
2. Are you running Spore through the Spore ModAPI Launcher Kit or not?
Creator of Solar Spore, Adventure Water and Sporigins.

EyoZenExtras wrote: ↑Tue Feb 16, 2021 5:00 pm When I open Spore dark injection I get an error that the Spore ModAPI launcher is not detected

1. Where did you buy and install Spore from?
2. Are you running Spore through the Spore ModAPI Launcher Kit or not?

Can you help me? I can't make screensots. When I try, a screenshot of 0 bytes comes out 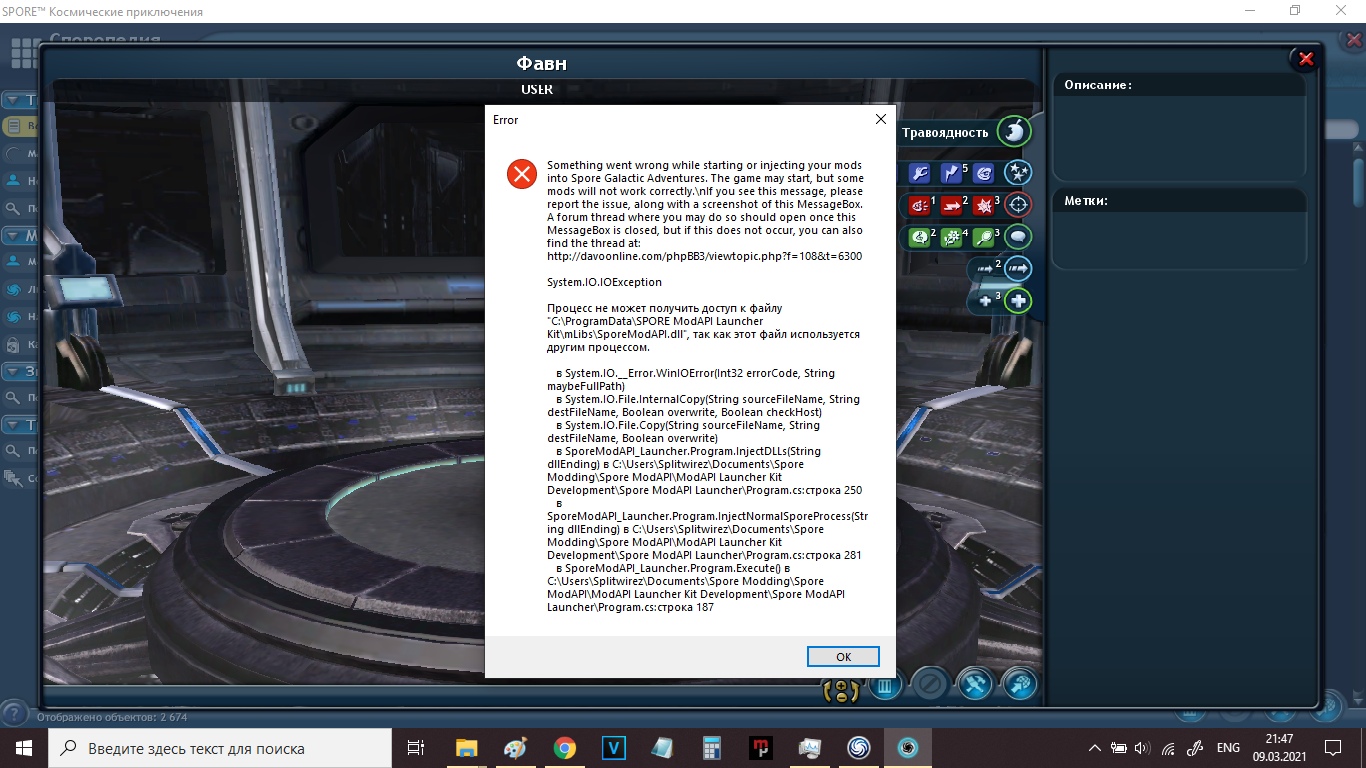 Hi, I've been playing modded spore for quite some time, though I had taken a long break and now wish to get back into it. A few months ago I was able to play heavily modded steam spore with no issue at all(I had 13 mods installed, a majority of them were large part adding/gameplay changing mods such as himeric engine, dark injection, one i forgot the name of but it turns cell stage into a 3d stage, etc). Now, the game gives me constant errors and has only successfully opened when opened through steam and not the API. I had also tried modding the origin version, however the origin version is completely broken for me and wont even open vanilla spore without crashing instantly(origin will also say the game is still at "% installed"). It really confuses me as the mods I had installed before worked perfectly, both on my beefy pc(which is what I'm on right now that's experiencing all the errors) and my old laptop, which I'm not too sure could handle spore in general anymore as it's gotten very slow over the years. Anyways, here are the error messages I keep getting

I've looked at and tried many guides on how to fix this and one had worked. Only once though as I'm now constantly getting the error again.

This one isn't too consistent and I've only seen it a couple times for the past few days I've been trying to fix this.

Third error to show up, this is the one that keeps redirecting me to the site and the reason for this post. I haven't really been able to fins anything so hopefully with this post I can get some help.

This one I have only come across once now, so I'm not too sure what to say about it.

Currently, I only have five mods that I'm trying to get working. Said mods are Dark Injection(which works on its own), Adventure Mega Music Mod part 1 and 2, Force Save(fixed version), and Project Rehatched. I would like to add the other mods I have downloaded but for now I would like to at least get these four working together. I'm really not sure what's causing this as all my stuff is completely up to date, I've uninstalled and reinstalled spore countless times, made sure my spore is properly patched to 1.5, and as mentioned earlier I tried getting origin spore to work however I'm only able to download Galactic Adventures alone and regular spore wont download, plus modding origin spore just isn't working at all. I really want to get back into heavily modded spore as the stuff I see on youtube has really inspired me and I wish to get back into learning and improving my modded creature making skills