EDIT: New updated; refer to version history below to see what changed.

I got suggestions that I should probably put this mod on the forums, so here it is. Lets just go straight to the FAQ:

What does this mod add?
This mod adds 130 unique parts. These 130 parts each have at four paint variations (base, coat, detail, and textureless), and some of the detail parts have additional special paints.

This means the total number of parts is 628. Because of this, New Drone Parts is the second largest part mod in terms of total parts (and possibly total unique parts too), second only to Dark Injection.

How is this mod different from the original Drone Parts, excluding additional parts and paint variations?
Almost all of the parts in the original mod used the same texture because honestly I was lazy regarding that, and at the time, I also did have any good tools for making better textures. In New Drone Parts though, every part has its own unique texture (which includes a normal map), resulting in over a thousand different textures. I used Substance Painter to make the textures, which allowed me to use custom materials to paint parts in bulk.

Known Issues:
*At least one of the icons is backwards; not even sure how this happened but okay.
*The parts on page 6 (excluding the textureless variants) may need to have their symmetry readjusted; note that if I do this, they will get moved to legacy (see below) to maintain compatibility.
*Some textureless parts paint better than others; this is a result of the UVs and the shapes; there are only a few parts that paint badly (and I'll probably fix these later on); most are as good as they're going to get.
If made very large, some textureless parts will start to paint weirdly; this is another UV related issue that probably can't be fixed as it relates more to how Spore paints textureless parts in general.

Important Notes (Please read this before downloading!)
*Blank pages are normal. This is a work in progress mod and I've placed empty pages in early preparation for when I add new parts.
*Just like the original Drone Parts, this mod unintentionally makes it easier to stack parts until they are out of bounds, so just be careful if you try to make a to-scale Mecha Godzilla.
*The parts on page 7 and in the extras tab are originally from ZbrushCore; the rest of the models were made by me.

IF YOU ARE RUNNING DARK INJECTION.....
The default/Darkspore UI that Dark Injection uses can cause the part icons in this mod to appear very small, especially if you're on a screen resolution smaller than 1920 x 1080. This is not specific to my mod though; this is an issue with Dark Injection's UI being too small, as this can happen to other mods too. This is being worked on by rob (so please don't bother him about this). For now though, the best solution is to just switch to a different UI, such as the Darkspore style only one.

IF YOU ARE RUNNING DELTA PAINTS.....
The textureless parts in this mod work fantastically with the Delta Paint mods, but some paints on some parts will leave weird white streaks/marks in some areas. I do not know the cause of this as it does not effect any of the vanilla paints. It's probably just something related to how Delta Paints is made. However, the issue is both rare and minor, and I ask that you please not bother the author of Delta Paints about this, especially since I'm not even sure if this can be fixed regardless of who tries to fix it.

Images (I'm only going to post one because these are kind of big and I couldn't get them to resize well without looking bad): 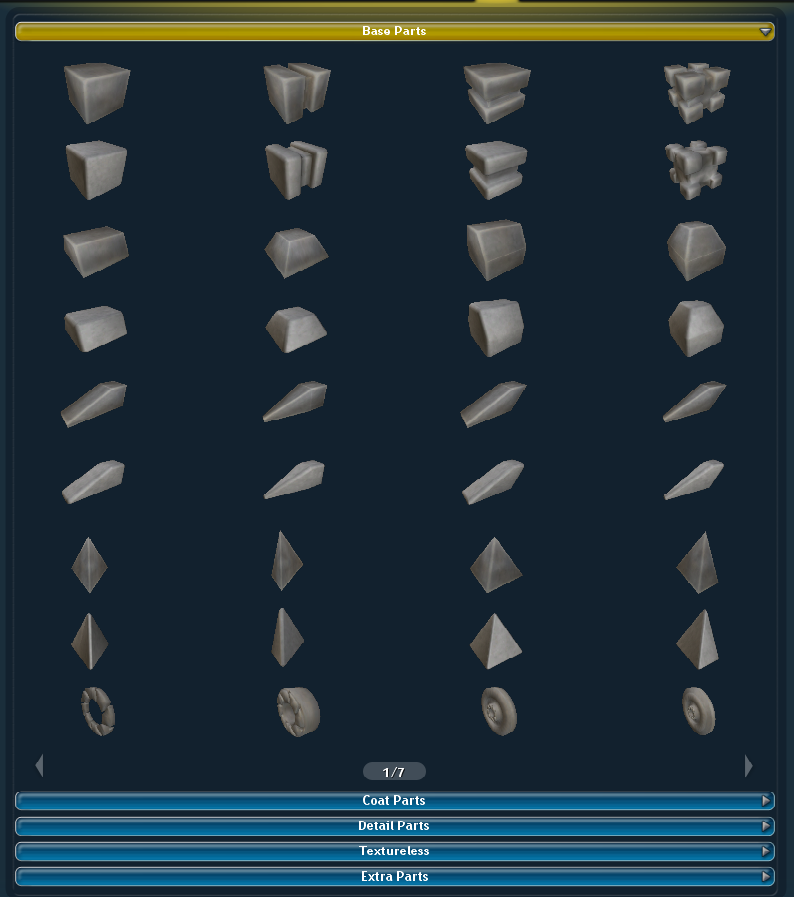 (There are a lot more parts than what is visible on this single image.)

Version History
6-19-2020: Added another category containing all of the same parts but as specular varients. Specular varients will pull the specular (or normal map) of the creature paints applied but will maintain the color chosen by the user. Note that you must have the graphics on at least medium for the effects to show up. Remember to delete the previous version of the mod before installing this one.

Download: https://drive.google.com/uc?export=down ... WJlPUvvrRA
Some sort of Force Save mod is required for this mod to work. This will be fixed in a later update.

What is Legacy?
In regards to this mod specifically, legacy refers to a place where old parts go when they get updated (updating means a new part (same but updated) takes their place). Legacy parts will remain in the mod files, but will not be in the UI. This means that if a part is updated that would normally break compatibility with old creations, compatibility will instead be kept because the old part still exists in the files. Thus, unless I do something stupid, any update that changes a part shouldn't break old creations that uses said part.
Last edited by Deoxys_0 on Fri Jun 19, 2020 12:26 pm, edited 3 times in total.
Top

This mod is very useful, Thanks!! mmm maybe some parts with form like shirt and pants, maybe?
Top